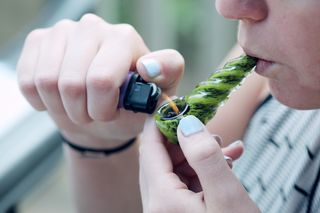 Ask many cannabis users and they’ll insist: Marijuana is not a gateway drug. Amid the escalating, tragic opioid crisis and a growing acceptance of cannabis use in recent years, it seems that fewer equate marijuana with serious drug use or drug problems.

For teens, however, there’s plenty of reason to worry. New research finds that it makes a difference how young you are when you start using marijuana—namely in terms of later developing an addiction to other substances. The younger the user is, the greater the risk of drug abuse in adulthood.

That timing may be a factor is a perplexing notion. For example, parents in France serve their children wine at young ages. Yet there is little evidence that this early exposure leads to alcohol problems. Pot, once considered benign, is now a known gateway drug. No, this does not mean that every person who smokes a joint will become a hard-drug user later on. However, the CDC reported that those who are addicted to marijuana are three times as likely to get addicted to heroin. Studies show that pot has addictive properties—ones that young developing brains are more susceptible to.

As marijuana becomes legal in more U.S. states for medical and recreational use, its availability for teenagers is likely to increase. Sherika Hill, Ph.D., at Duke University is the lead author of the study “Predicting Persistent, Limited, and Delayed Problematic Cannabis Use in Early Adulthood: Findings From a Longitudinal Study” published in the Journal of the American Academy of Child and Adolescent Psychiatry. She assessed data from more than a thousand participants who were followed each year from age 9 to age 30. Because of the patterns she and her colleagues saw, Hill believes the increased legalization of marijuana will lead to more problems among young adults.

As teens have long pilfered from parents’ liquor cabinets, they’ll also seek out their parents’ pot stash or get it another way. Most of us have heard “I have a friend who can get you whatever you want” or a variation when older friends offer to buy beer or drugs for someone underage. This reality suggests that as marijuana becomes as ubiquitous as alcohol in many communities, the risk for teen marijuana use increases.

We already have an opioid crisis impacting teens and young adults. Is increased access to marijuana going to escalate substance abuse among our younger population? 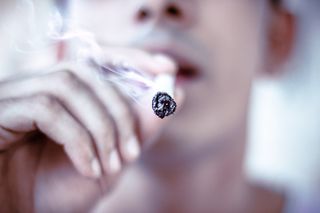 In the 2018 study “Age of Cannabis Use Onset and Adult Drug Abuse Symptoms: A Prospective Study of Common Risk Factors and Indirect Effects,” published in the Canadian Journal of Psychiatry, Charlie Rioux, Ph.D.. and her colleagues “find that boys who start smoking pot before 15 are much more likely to have a drug problem at 28 than those who start at 15 or after.”

The study reveals that the younger teens start smoking marijuana, the greater the likelihood they will have a substance-abuse problem when they are older.

Seventy percent of the population reports using marijuana by age 30 with problematic use peaking between ages 18 and 21. Starting to smoke pot before age 15 puts boys’ risk of having a drug issue in their late 20s at 68 percent. The percent drops to 44 for those in the study who started between the ages of 15 and 17. Dr. Rioux adds, “Early onset CU [cannabis use] were found to be associated with delinquency and affiliation with deviant peers in early adolescence.”

Carolyn Coffey, Ph.D., and George C. Patton, M.D., report in the Journal of Canadian Psychiatry, “The adverse consequences of cannabis use are most clear-cut in heavy early adolescent users. These consequences include educational failure, persisting mental health problems, and progression to other substance use.” These studies serve as further warning to parents and their children, a warning applicable well into young adulthood.

Young adults not ‘out of the woods’

Sherika Hill, Ph.D., who tracked early-adult cannabis users from age 9 to age 30, adds that marijuana use is associated with long-term health and social consequences. This includes “higher risk for altered brain development, psychosis, and exacerbated symptoms of schizophrenia, escalation to harsher drug use, and lower educational attainment and employment.”

Marc Aronoff, an author and expert on educating teens about marijuana use, advises a middle-ground approach. His book, One Toke: A Survival Guide For Teens, extols an open dialogue between teens and parents. He also cautions against using severe punishment or emotional manipulation. Teens should feel that their parents are on their side—while respecting their rules as law.

Some rules and approaches to raising adolescents are debatable: monitoring cellphone and technology use, driving friends, and curfews, for instance. As the mounting research suggests, marijuana use among teens and young adults is not as debatable as it once was.