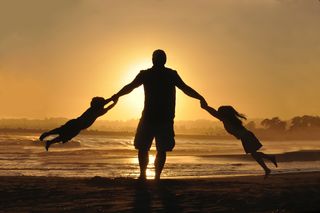 “Children are a social benefit to everyone, but they are a public good for which mothers are paying a disproportionately high price,” observed a researcher at the University of New South Wales’ Social Policy Research Centre more than a decade ago.

With fathers assuming more active roles at home, you have to wonder why in 2020, views remain measurably different about parents’ roles, happiness, and well-being. Clinical psychologist Darcy Lockman, author of All the Rage: Mothers, Fathers, and the Myth of Equal Partnership, writes in a New York Times op-ed, “What ‘Good’ Dads Get Away With,” that “By passively refusing to take an equal role, men are reinforcing ‘a separation of spheres that underpins masculine ideals and perpetuates a gender order privileging men over women.’”

To which Ashley McQuire, writing for the Institute of Family Studies, finds “the liberal feminist obsession with chores to be dated and tired.” She argues, “Those women want to be the primary caregivers for their children and are happy when they can prioritize what they do at home. It’s a cold, hard fact that for some reason, feminists like Lockman just cannot accept.”

On childcare, fathers spend about eight hours a week (an uptick from men’s two-and-a-half hours 50 years ago) compared with mothers’ 14 hours, according to the Pew.

How mothers and fathers spend the time they have with their children affects mothers’ and fathers’ well-being. A new study, “Happy Moms, Happier Dads: Gendered Caregiving and Parents’ Affect,” underscores previous research indicating that dads are happier and tells us why. The study’s researchers, Cadhla McDonnell, Nancy Luke, and Susan E. Short, analyzed specific childcare activities to determine where and when the activity took place, which parent was present, how much care was involved and how mothers’ and fathers’ moods were affected.

Their study, published in Journal of Family Issues, looked at who did what in terms of meeting a child’s basic needs; who was involved with playtime or sports; or homework help; and who made children’s arrangements, doctor appointments, or did most of the transporting. They focused on the context of care rather than the amount of time spent to determine a parent’s level of stress and happiness. The authors state, “Parenting is emotionally demanding and highly gendered. We observe a gender imbalance in the emotional rewards of childcare: Fathers report more happiness, less stress, and less tiredness than mothers.”

Mothers who work say that “despite these challenges, many working parents—including about 8 in 10 full-time working mothers—their current employment situation is what’s best for them at this point in their life regardless of the stress and feelings that working “makes it harder for them to be a good parent.”

Difficulties aside for both parents, for fathers in the “Happy Moms, Happier Dads” study, the emotional rewards were greater; they were happier and less stressed because they engaged in more recreational activities and fewer of the stressful aspects of parenting.

Reporting on findings from an Austrian study for Psychology Today, Michael Ungar takes the position that because fathers are doing more childcare, they are becoming more stressed than mothers especially in families with young children.

Leah Ruppanner, who teaches sociology at the University of Melbourne, found otherwise. She and her colleagues reviewed data collected from about 20,000 Australian families over 16 years. In addition to finding that having a second child affects the mental health of parents, she concluded that “Prior to childbirth, mothers and fathers report similar levels of time pressure. Once the first child is born, time pressure increases for both parents. Yet this effect is substantially larger for mothers than fathers. Second children double parents’ time pressure, further widening the gap between mothers and fathers.” Time pressures and the stress they create “did not diminish as children aged.” Ruppanner’s findings seem to hold even when children reach adolescence.

The study, “Mothers’ and Fathers’ Well-Being in Parenting Across the Arch of Child Development: Well-Being in Parenting by Child Age,” assessed how 18,000-plus parents felt in different activities with children at different ages using the American Time Use Survey Well‐Being Module. Ann Meier, lead researcher, found that both parents are least happy with teens, but mothers “report more stress and less meaning [than fathers] with adolescents.” The study underscores that the teen years are hard on parents’ happiness and well-being. Nonetheless, the researchers summarized that “mothers shoulder stress that fathers do not, even after accounting for differences in the context of their parenting activities.”

Among the families you know or in your own family, would you agree that the father is happier, less stressed, and more content than the mother in relation to raising the children? Or, do you feel, like Ashley McQuire, that “women want to be the primary caregivers for their children and are happy when they can prioritize what they do at home” regardless of how it affects their well-being?