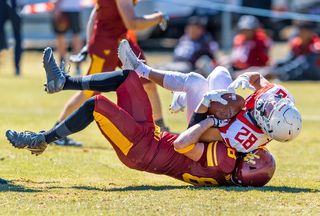 It’s hard to dispute that football is America’s most popular sport, but for how long? Heeding warnings of the dangers that have been confirmed in many studies over the past few months, parents increasingly keep their children off the football field and high schools have difficulty filling their rosters.

For decades, New Jersey high schools have sent their players to top college football strongholds as well as to the NFL. That’s changing. As one NJ high school coach told the New York Times, he had to forfeit a game because he did not have enough players on his roster. For Metuchen (NJ) High School, that was a first in its football program’s nine-decade history. According to the school’s principal, “Even a few years ago, the football team had 55 members.” Recently the roster dropped to 17.

After reading the Times article, one person commented, “Hopefully it’ll become a niche sport by the next generation of kids. It might survive with a drastic change of rules in regards to contact. With the exception of boxing, I can’t think of another sport that’s all about bashing your own brain.”

I couldn’t agree more. I have been anti-football my entire adult life. Many consider my attitude seriously un-American. I carried my distaste for the sport and unleashed it on my son when he was a child—something I addressed on this blog years ago in a post titled, “Why I Brainwashed My Son.” In it, I explained why I was against my son ever playing football. Now more and more parents assess the dangers and have grave concerns about its brutality, as well they should.

Head Injuries Account for Much of the Reduced Participation

Recent studies confirm parental fears. The Radiological Society of North America studies brain changes in high school and youth players by equipping them with specialized sensors in their helmets to track changes. Their conclusion: “Our study has found a significant decrease in gray matter pruning [essential for brain development, ‘pruning gets rid of the synapses that are no longer used, [so] the brain becomes more efficient with aging’] in the frontal default mode network, which is involved in higher cognitive functions, such as the planning and controlling of social behaviors.”

Another study reported in the Neurobiology of Disease journal examining players with no evidence of concussion after just one season observed significant microstructural changes in gray matter. “A single season of high school football may cause microscopic changes in the structure of the brain, according to the study. A new type of magnetic resonance imaging (MRI) revealed significant changes in the structure of the grey matter in the front and rear of the brain and changes to structures deep inside the brain.”

A study in JAMA Ophthalmology did not look at effects like dizziness or confusion—both of which can be clear indications of concussion—but rather examined eyeball and eyelid movements that can result from “mild, repetitive impacts in football.” Although more research is needed in this area as players regained normal vision by the fourth quarter of the season, their findings and the long-term implications of brain injury affecting vision should be worrisome to parents.

Has Football Finally Met Its Demise?

In spite of the evidence, new rules, and better equipment to prevent head injuries and concussion, many still view football as a ticket to a college scholarship and a chance of eventually playing in the NFL. Anyone who has applied to college seeking a sports scholarship knows the likelihood of that happening is slim.

It’s true that much has changed to supposedly make the game safer. Counterbalancing better helmets, reducing impact during practice for young players and new rules designed to protect against injury and concussions, however, is the fact that players from high school to the pros weigh more than they did decades ago. The added weight and heft behind any given tackle makes the force of impact so much greater when a player’s head hits the ground.

The sport is dangerous and parents, by keeping their sons off the field, are paying attention to medical evidence and shrinking the pool of talent. With the pool of potential pros coming out of what were once “feeder high schools,” you have to wonder what’s next for the sport of football.

In an article discussing labor negotiations between wealthy owners and players, journalist Devin Gordon wonders the same thing: “… against the backdrop of a sport with so much built-in violence that parents and school districts are increasingly forbidding their children from playing [football], a trend line that in theory could kill the sport.”

It bears repeating: The most condemning comments (and support for my position) came from former NFL quarterback Boomer Esiason, who told CBS News that the key to change is if “the moms of the world decided to say ‘my little boy can’t play football,’” and from Terry Bradshaw, former quarterback for the Pittsburgh Steelers, who told Jay Leno if he had a boy, he wouldn’t let him play football, because “the fear of getting these head injuries is too great.” If these football greats are staying wary about football, I don’t feel so badly about strongly influencing my son.

Feel free to disagree (or agree) in the comment section.