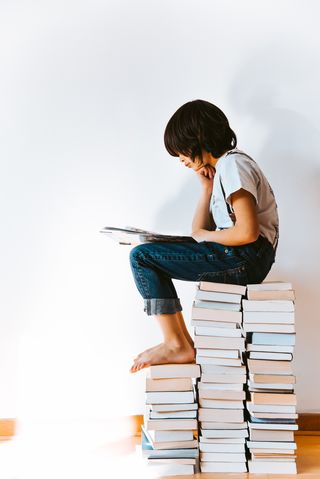 Shared beliefs about boys’ and girls’ reading abilities are markedly gendered and are, in fact, stereotypes. Two we know well: Boys are good at math; girls, at reading. It is alarming that gender stereotypes have such a profound effect on children’s reading and at young ages.

Francesca Muntoni and her colleagues at the University of Hamburg wanted to know if classmates’ and students’ own stereotypes favoring girls in reading affected reading outcomes. She and her colleagues went into the classroom to find out if peers were an influence. They tested over 1500 boys and girls when they were fifth-graders and again when they were sixth-graders with an average age of 11.

I asked Dr. Muntoni, the lead researcher, for insight into how the gender stereotypes in the classroom context affected the children her team studied.

Q: Did you find gender reading stereotypes prevalent in the classroom?

A: We asked the students whether girls or boys generally read better, have more fun reading, and read more. We interpreted the answers as endorsement of the stereotypes. On average, the children tend to agree with the view that reading is for girls.

Q: Did students’ gender stereotypes about their reading abilities affect their performance?

A: It was not only classmates’ gender stereotypes that related to how the students in the class were motivated to read, to how they assessed their own reading ability, and to how well they performed in reading.

We also found that students’ own gender stereotypes favoring girls in reading had an effect on their reading outcomes. Interestingly, stereotypical gender differences were observed: Boys who thought that reading is for girls were less motivated to read, held weaker reading-related beliefs about their own competence, and performed less optimally on the reading test. Girls experienced positive effects from their own gender stereotypes on their reading-related competence beliefs.

Q: Can you explain how students’ gender stereotypes influence their academic outcomes? Did they differ widely between boys and girls in your study?

A: We have not directly investigated these processes in our study. Nonetheless, previous research has suggested different ways in which gender stereotypes may affect students academically.

You can think of it like this: Reading is stereotyped as a female domain. Such stereotypes can affect boys by causing them to devalue their own actual reading ability while also having less motivation to read, which in turn impairs their reading performance. Moreover, significant others—how we call important persons in the children’s lives such as their classmates—may create consciously or unconsciously a climate in which certain behaviors, preferences, or talents are considered as being typically male or female. Students’ more or less gender-typical behavior may then be reinforced or penalized by their classmates’ reactions. So, for example, when a boy wants to talk about a book with his mates versus a girl, the experience will be different for each.

It is important to note that not only the classmates’ gender stereotypes but also those of parents or teachers may have effects on the students’ academic outcomes.

Q: What was the most striking thing you found?

However, the most striking thing we discovered was the fact that we found not only short-term but also long-term effects on boys’ reading-related motivation, competence beliefs, and achievement. This means that the effects of stereotypes were still observed after 18 months. This finding suggests that gender stereotypes in classes can have profound consequences on boys’ reading development.

Q: Are these stereotypes different from the ones held by parents and many educators?

A: In two other studies, we also asked parents and teachers about their reading-related gender stereotypes. In these studies, we found similar effects: Boys’ underachievement in reading was related to the negative stereotypes their parents had regarding reading, which was related to boys devaluing their reading ability. In fact, boys tended to feel less competent in reading and less motivated to engage in a reading task when their parents thought that reading is for girls. Further, teachers endorsing the gender stereotype also had higher expectations for girls in reading, which as a self-fulfilling prophecy were related to girls’ increased levels of reading achievement, but were detrimental for boys’ reading achievement.

Q: Since academic outcomes are affected significantly by gender stereotypes, do you have any recommendations for curtailing gender reading stereotypes in the classroom? Are there ways parents can help?

A: Our findings lead to the question of what students—teachers and parents too—can do to counteract gender stereotypes and to reduce socially determined gender disparities in reading. Teachers play a particularly important role in creating a classroom context in which neither girls nor boys are impaired by stereotypes of their classmates. They should attach great importance to socializing boys and girls without expecting stereotypical behaviors—instead of reinforcing stereotypes about gender-specific competencies.

This is also true for parents, as they play an important role in children’s socialization to gender roles. Encouraging parents to be positive role models concerning gender stereotypes of reading should be the first goal in order to promote boys’ success in reading.

In order to improve boys’ reading engagement in school, students, parents, and teachers should understand that their stereotypical attitudes and behavior might have consequences. It is important that students monitor their gender stereotypes in order to counteract their effects on classmates’ outcomes in order to create a gender-fair learning environment.

How to Set OKRs to Keep Your Goals on Track

How to Organize Tasks With A Weekly To-Do List

5 Things to Remember When You Don’t Believe in Yourself